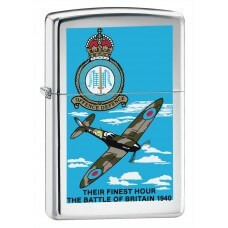 Genuine Zippo Lighter showing the iconic Spitfire which was a British built single-seat fighter aircraft that was used by the Royal Air Force and many other Allied countries
during and after the Second World War.
The Spitfire was built in many variants, using several wing configurations, and was produced in greater numbers than any other British aircraft.
It was also the only British fighter to be in continuous production throughout the war,
the Spitfire continues to be popular among enthusiasts and this lighter is a lovely gift reflecting the plane

Product manufactured in Bradford, PA. Every Zippo product we sell is brand new,  In Zippo's original packaging, and comes with the famous Zippo Lifetime Guarantee - "It works or we fix it free!"
This item usually ships within 4 to 7 business days


Your Review: Note: HTML is not translated!

Enter the code in the box below: